Hi! Everyone, this week's FEATURED ARTIST OF THE WEEK is the very talented  singer-songwriter, musician  & producer JELLY CLEAVER

Please introduce yourself
I’m a singer-songwriter, jazz guitarist and producer. I’m also an activist and this really influences my music and the lyrics I write. I love lots of different genres so have quite an eclectic style and like to throw myself into different music scenes. I’m really into the jazz scene and the punk/DIY scene in London at the moment.
How did you get into music?
I started playing guitar as soon as I could hold one pretty much because my dad was a guitar teacher, and I’ve always had a really deep connection to music. I’ve tried lots of different aspects of music out though, from leading an African singing and drumming ensemble to starting a rock band. I just love music in all its forms.
What instruments do you play?
Guitar’s my first instrument but when I’m recording my own music I often have to double up on all the instruments. I think on my first album I ended up playing about 10 different instruments, from mandolin to recorder, but I’m not exactly a pro at any of them. I really enjoy playing drums and bass, but guitar is my baby.
Who are your influences?
I’m obsessed with Joni Mitchell. I love Esperanza Spalding, James Blake, Jeff Buckley, Terry Callier - artists who don’t sound like anyone else. When I was younger I was a total flower child, I loved Jimi Hendrix, Led Zeppelin, and anything from the 60s. I’m now really inspired by lots of artists I know in the scene, especially jazz musicians in London. But anything I come across that I think is really good or interesting inspires me.
Tell us about your latest release 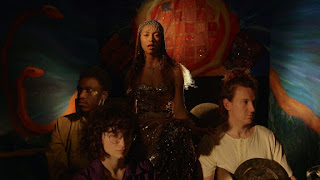 My single ‘VI II V’ is actually quite an old song for me. I wrote it about five years ago as a stream of consciousness poem. It was me trying to process a lot of thoughts I was having at the time, and it was definitely influenced by my ideas around Buddhism and Existential Philosophy. In the recording I used real instruments – drums, strings and a horn section, but I tried to approach it a little bit more as if I was producing electronic music. I’m really happy with the effect I managed to get with the drums, but it came after a lot of experimentation.
Whats your songwriting process?
It tends to be really quick and come all at once – I’ll just get the whole song in my head. Often it comes when I’m in the shower or on a jog and I’ll have to try and jot down the idea and work out the chords before I forget it. It means that what I write usually comes as a surprise – one day it’ll be jazzy, the next day a full-blown grunge song. I wish it didn’t take so long to record them because I’ve got so many song ideas bouncing around in my head.
Which musician/ artist would you most like to collaborate with & why?
I think my dream artist would be James Blake because I’m getting more into electronic production and I love the way he arranges his music and just takes his songs in really interesting places.
If you were on a desert island what 3 musical gear would you take?
Definitely my guitar, my laptop to mess around on Protools while I was away, and some good quality headphones so I can listen to all my favourite tunes in hifi.
Where can fans find your music (links etc)?
https://www.youtube.com/watch?v=Kg7ZK2OxHiw
https://open.spotify.com/artist/7brjzhmgOWCGkdEI2AIRzl
https://www.facebook.com/jellycleavermusic/
https://www.instagram.com/jellycleaver/
https://twitter.com/JellyCleaver
I would like to say a huge thank you to JELLY CLEAVER for taking part in FEATURED ARTIST OF THE WEEK 😀😀
Until next time
Law