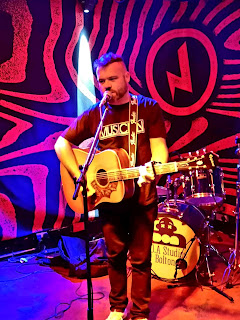 Hi! Everyone this weeks FEATURED ARTIST OF THE WEEK is the singer-songwriter & guitarist: KEV M
1.Please introduce yourself
Hello! I'm Kev M, a singer/songwriter from Hull, England. I've been performing live and self releasing music for around eighteen months now including at Jimmy's In Manchester in August. I played at 'Live on The River' on Thursday October 24th on a floating pub on The Thames
2. How did you get into music?
An Uncle of mine gave me an old guitar of his when I was aged 15. I took guitar lessons shortly after and along with some self teaching I learned to play. In terms of actual music, I grew up in a home where music was pretty much constantly on - Elvis, The Beatles, T Rex, Bruce Springsteen. I got into music as a child in a big way, As a teenager I gravitated to rock and alternative. These days it's more indie.
3. What instruments do you play?
I play the guitar and that is pretty much it though i'd love to learn to play the piano too.
4. Who are your influences?
I think subconsiously it's always been great pop tunes from my childhood; in terms of style definitely Richard Ashcroft (The Verve) and the music of Oasis has been a huge influence on me too. Right now i'm finding Gerry Cinnamon to be really encouraging; his whole DIY ethos and his grass root support is amazing to watch grow plus he has great tunes.
5. Tell us about your latest release
My latest single release is called 'Won't You' it's a lovely acoustic tune about being in a long distance relationship (not that i've ever been in one!). I wrote it earlier this year so it's still really fresh to me. It's real, heartfelt and a song that I love to perform live.
6. Whats your songwriting process?
I pretty much usually always write the music first. It'll be a few chords put together and a strumming pattern and see how things go from there. Then i'll hum a melody over the top and somehow words fall into place for me. I'm really lucky that I can do that. From time to time if I hear a great phrase somewhere i'll keep a note of it to use in a song if it fits too. 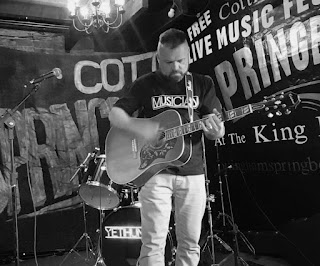 7. Which musician/ artist would you most like to collaborate with & why?
What an amazing question. I think Richard Ashcroft as i'm a huge fan and also because he is an amazing songwriter. I could learn so much from him not just as a writer but as a per
former.
8. If you were on a desert island what 3 musical gear would you take?
I'd just need my guitar and plectrum I think. Oh and a piano as i'd have plenty of time to try and learn to play it.
9. Where can fans find your music (links etc)?
My website is https://bit.ly/realkevm which includes my gig dates.
Facebook page: https://facebook.com/realkevm
Youtube Channel: https://youtube.com/c/realkevm - here I do a regular vlog/diary, cover songs and post my original music.
Spotify: https://sptfy.com/ebm
I would like to say a huge thank you to KEV M for taking part in this weeks 'Featured Artist of The Week' 😃😃