Hi! Everyone, This weeks 'FEATURED ARTIST OF THE WEEK is the talented musician & singer-songwriter JOHNNY OPUS 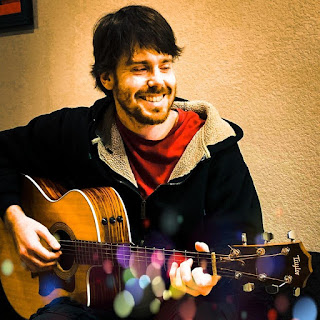 1.Please introduce yourself
Hello, I am Johnny Opus. My real name is John and I was born in Santa Cruz California. I moved to Austin TX just this year to pursue my dream as a working musician.
2. How did you get into music?
My father played guitar around the house as well as campfires so I'v been exposed to music since before I can remember. I was first turned onto actually playing guitar when I heard Rage Against the Machine's "Guerilla Radio" on MTV. I played electric guitar and was pretty good but it wasn't until my father showed me some fingerpicking patterns that I really fell in love and ran away with it. In a short amount of time I was as good as he was, technically speaking haha.
3. What instruments do you play?
Guitar is my first instrument but I dove deep into the Piano and the classical literature of Beethoven, Chopin and Bach when I was studying music at my local Junior College. I also sang in a choir every year from middle school all the way up until I graduated from SJSU with a Bachelors in music composition.
4. Who are your influences?
My first influence as I mentioned above was Rage Against the Machine but I was also very influenced by Pennywise, Sublime and Bob Marley in my younger years.My guitar technique today is heavily influenced by Elliot Smith. After learning his song "Angeles" I started incorporating the way he would pick and strum simultaneously into my own songs and arrangements.My number one favorite band of all time is Tool, always has been and probably always will be...
5. Tell us about your latest release
My latest release is titled Ms Fortune EP which is both dark and optimistic. The first song "Ms Fortune" portrays a feeling I'm sure many of us have. The feeling of having a gift, a great vision or objective in life but not sure how to accomplish it. Many times it feels as though there are nothing but obstacles in front of us and Ms Fortune, Lady luck, Fate, etc. seems to tease or mock our ambitions with the adversity that is a fundamental aspect of reality. The other songs that follow give insight into who I am, where I come from, my philosophy about life and my determination to continue this musical journey despite the adversity that comes with pursing art as a career.
6. Whats your songwriting process?
There is no single way in which I go about writing a song. Sometimes I start with instrumental guitar. Other times I will just free write my stream of thought onto pages in a notebook and then over time refining emerging ideas into rhymes and structures (my song "Rustic Soul" is an example of that). Some songs come about as a matter of utility for example my favorite song "Hero's Journey" began as way for me to open a set or grab peoples attention. I finished it after reading the book Hero With a Thousand Faces by Joseph Campbell. Usually I will write a song around an idea or subject. The specific words and rhymes are usually not as important as the over arching message I am trying to convey. Interestingly enough I feel that my most clever rhyme schemes emerge from the lack of attachment I have to specific words or phrases I come up with at first. Some songs end up abandoning entire verses which I started out with.My EP only has 4 tracks however I'v been writing songs my whole life and have a number of them waiting to be recorded...
7. Which musician/ artist would you most like to collaborate with & why?
Danny Carry!! The drummer of Tool, he is incredible, I would love to collaborate with his intricate combinations of Tabla's, traditional rock kits and electronics.Another artist that comes to mind is Bassnectar because I would really like to experiment with the potential electro acoustics has to offer. I see a lot of potential in the realm of electronic music and as my career evolves so will my sound.
8. If you were on a desert island what 3 musical gear would you take?
My guitar, my piano and a harmonica.
9. Where can fans find your music (links etc)?
My EP is streaming just about everywhere. I will drop the Spotify link below but you can also find me on Apple Music, itunes, etc.https://open.spotify.com/album/32K2n1BwQ76eHp12eaYmSO?si=R-xcLL9vRHC8bsmHk0fxaAI just released my first youtube video which I filmed and edited myself. I plan to continue to put out content there moving on into the futurehttps://www.youtube.com/channel/UCo50wpoUzEueiB9zD4vA_Tg?view_as=subscriberAll of this can be accessed through my website along with physical merchandise such as CD's and stickers. Anyone who wants to stay updated when I release new merch, albums, tour dates etc. can find my newsletter on my website aswellhttps://www.Johnnyopus.comAs an Independent musician I want to people to have as much access to me and my music as possible so you can find me on almost every big platform.https://www.twitter.com/johnnyopushttps://www.instagram.com/johnny0pushttps://www.facebook.com/johnnyopuscraft https:ww///.twitch.tv/johnnyopusTikTok @Johnnyopus www.linkedin.com/in/johnnyopus
I would like to say a huge thank you to JOHNNY OPUS for taking part in 'Featured Artist of The Week'😀😀
Law